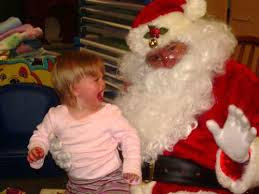 The sales figures for Black Friday are out and they are scary. Brick-and-mortar store sales plummeted 10.4% over the weekend from last year's levels.

Online sales increased on Black Friday by 14% over last year to $2.7 billion
and on Cyber Monday by about 16% to $3 billion, but that did not make up for the plunge in in-store sales. On-line sales were up about $750 million while in-store sales fell $1 billion.

Retail sales at Walmart and Macy’s have looked sad for a while. Retail sales point to the potential for the Grinch to steal Christmas for investors.

The idea that retail sales drive the economy comes from an ancient fallacy. As Hayek wrote:


John Stuart Mill’s profound insight that demand for commodities is not demand for labor, which Leslie Stephen could in 1878 still describe as the doctrine whose “complete apprehension is, perhaps, the best test of a sound economist,” remained for Keynes an incomprehensible absurdity (Collected Works, vol. 9., p. 249).

The fallacy states that as consumers spend, producers ramp up production to meet demand and in the process hire more workers. The Austrian business-cycle theory (ABCT) demonstrates the opposite: demand for consumer goods (commodities) might increase hiring in consumer goods industries, but it also causes consumer goods producers to quit buying capital goods such as equipment. The result is a collapse in sales in the producer goods sector. Two centuries of data on recessions show that the largest swings take place in the producer goods sector. The retail sector is calm in comparison.


The really scary data comes from the producer goods sector and shows that industrial production has been in a recession for months:

After skirting right at the breakeven 50 line since September, ISM’s manufacturing index broke below in November to 48.6 which is more than 1 point below Econoday’s low-end estimate for the lowest reading since June 2009. The decline includes a significant dip for new orders which are down 4.0 points to 48.9 and the lowest reading since August 2012.

In addition, business investment has been growing at a slower pace than glaciers as the ABCT predicts:


Business investment across the U.S. is fizzling out.

Companies appear reluctant to step up spending on the basic building blocks of the economy, such as machines, computers and new buildings. The broadest measure of U.S. business investment advanced 2.2% from a year earlier in the third quarter, the Commerce Department said last week, marking one of the worse performances of the six-year-old economic expansion.

Other measures show an even gloomier picture. A gauge of capital expenditures—orders for nondefense capital goods excluding aircraft—declined 3.8% through the first 10 months of the year compared with the same period in 2014, according to government estimates.

The NBER measures recessions using GDP, which measures mostly retail sails. Flat sales for the Thanksgiving weekend may indicate that GDP is finally catching up with the recession that has existed for a while in the producer goods sector.
Posted by Roger McKinney at 8:56 PM