Nobel Laureate in economics Robert Shiller spoke at the AAII investor conference this month where he quoted Keynes on investing: "Most probably, of our decisions to do something positive, the full consequences of which will be drawn out over many days to come, can only be taken as a result of animal spirits—of a spontaneous urge to action rather than inaction."

Keynes thought investors were driven by animal spirits. Shiller has even a lower opinion of investors. He said at the World Economic Forum held in Davos, Switzerland in 2010 that hecould identify bubbles using the same methods that psychologists use to diagnose mental illness in patients. His key points were these:

1. Sharp increase in the price of an asset.
2. Great public excitement about these price increases.
3. An accompanying media frenzy.
4. Stories of people earning a lot of money, causing envy among people who aren’t.
5. Growing interest in the asset class among the general public.
6. New era “theories” to justify unprecedented price increases.
7. A decline in lending standards.

Read more »
Posted by Roger McKinney at 9:37 PM No comments: Links to this post

Fight the Fed or profit from its profligacy?

The Federal Reserve is a century old this year, but instead of cheering, good economists are lauding the apology in the Wall Street Journal by a Fed insider, Andrew Huszar, a senior fellow at Rutgers Business School and a former Morgan Stanley managing director. In 2009-10, Huszar managed the Fed’s $1.25 trillion agency mortgage-backed security purchase program.

Read more »
Posted by Roger McKinney at 2:02 PM No comments: Links to this post

Here is the update to my forecast of the S&P500: 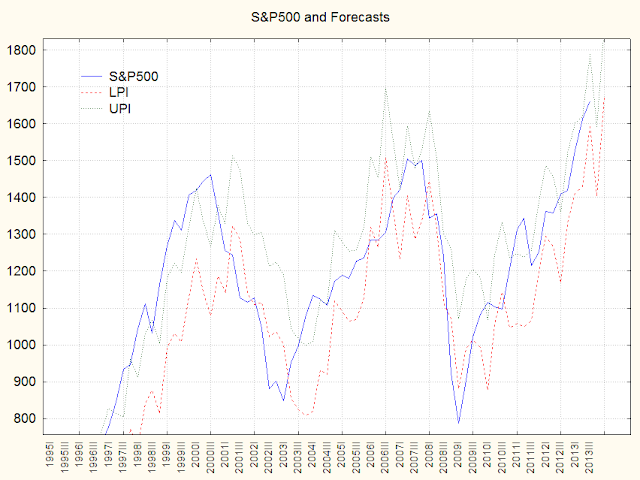 Read more »
Posted by Roger McKinney at 3:26 PM No comments: Links to this post

A Monkey with two bananas - Why the Obamacare web site cratered

The Obamacare web site fiasco has proven to be a gold mine for the late night comedians. The failure has been so massive that even the left listing mainstream media has to acknowledge it. No one should be surprised that socialists can’t manage projects well because they have a notorious contempt for the profession of management.

The left think the same thing of managers and the profession of management, so they never bother to study it or imitate good managers. Recall President Obama’s contempt for management during the financial crisis and ridicule of them for using corporate jets. Obama would never consider taking a trip of any distance in any vehicle other than Air Force One because his time is so valuable. But he considers the CEO’s time to be worth so little that he can ridicule them for doing the same thing he does.

Read more »
Posted by Roger McKinney at 7:17 PM No comments: Links to this post