Is the stock market overvalued?

of ’s Jeremy Siegel has been shooting again at Yale professor Robert Shiller’s stock market valuation model, the cyclically-adjusted price-earnings ratio, or , according to William L. Watts at The Tell blog on the MarketWatch web site at http://blogs.marketwatch.com/thetell/.


showed an adjusted P/E ratio of 23.57 recently, considerably above the long term average and an indication that the market is overvalued. Here is the chart of CAPE from ’ blog: 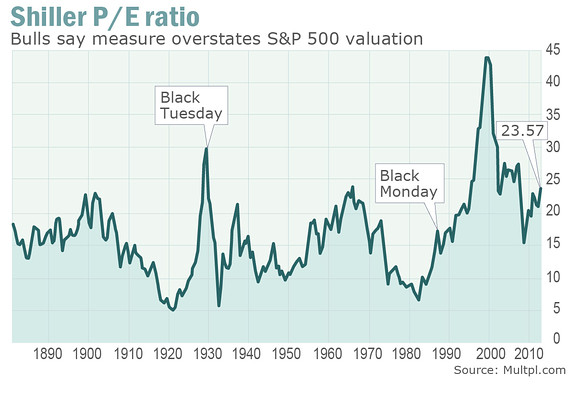 Read more »
Posted by Roger McKinney at 7:53 PM No comments: Links to this post

Is the stock market a casino?


The media often portrays the stock market as a casino. That attitude first gained academic cover with J. M. Keynes. Ludwig Lachmann wrote, “Thus, seeing the importance of expectations in asset markets, and disliking the implications of what he saw, he launched his famous diatribe on the Stock Exchange as a ‘casino.’”[1] Here are excerpts from Lachmann’s defense of the stock market against Keynes’ assault:
“Furthermore, in his Chapter 12 on ‘The State of Long-Term Expectation,’ the famous diatribe against the Stock Exchange, it becomes painfully evident that Keynes failed to grasp the nature of the problem posed by the existence of inconsistent expectations. Instead of studying the process by which men in a market exchange knowledge with each other and thus gradually reduce the degree of inconsistency by their actions, he roundly condemned the most sensitive institution for the exchange of knowledge the market economy has ever produced! [2]


“The Stock Exchange is a market in ‘continuous futures’. It has therefore always been regarded by economists as the central market of the economic system and a most valuable economic barometer, a market, that is, which in its relative valuation of the various yield streams reflects, in a suitably  objectified’ form, the articulate expectations of all those who wish to express them. All this may sound rather platitudinous and might hardly be worth mentioning were it not for the fact that it differs from the Keynesian theory of the Stock Exchange which is now so much en vogue.

Read more »
Posted by Roger McKinney at 10:01 PM No comments: Links to this post