Led by the Fed Investing Advice

If you have followed this blog, or read Financial Bull Riding, you’ll know that the stock market tends to follow the business cycle and Fed monetary policy determines the business cycle for the most part. So I was very interested to read this title: "Voices: SteveKrawick, on Asset Allocation Guided by Fed Policy." Krawick wrote

“There are four phases in a Fed cycle. Today we're in the fourth and final phase of the cycle that began around 2008. This phase is marked by an accommodating Fed, which means low interest rates. Historically, in this environment, consumer discretionary stocks and financials have outperformed S&P benchmarks and their peer sectors. So, during this cycle, we have our clients overweight in that sector and underweight in others like industrials, materials, and technologies, which tend to underperform under current conditions.”

Read more »
Posted by Roger McKinney at 8:52 PM No comments: Links to this post

Here is the latest forecast of the S&P 500 average for the fourth quarter this year. The market made a head fake lower last year so it may turn around again depending on how well profits for the first quarter of this year turn out. But from the looks of things we have probably hit the high for this year and maybe for the bull market. This is a good time to think about gold and silver or possibly emerging markets since they have fallen so low. 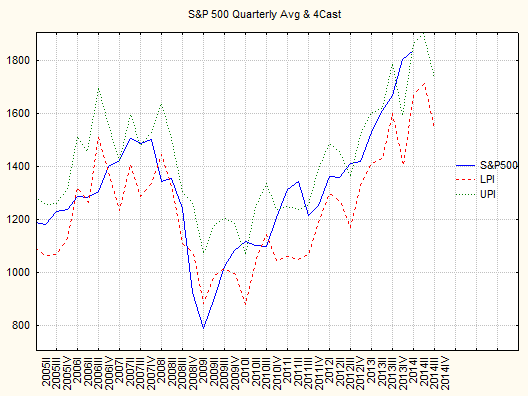 Posted by Roger McKinney at 1:02 PM No comments: Links to this post

The View from Vienna on Interest Rates and the Stock Market 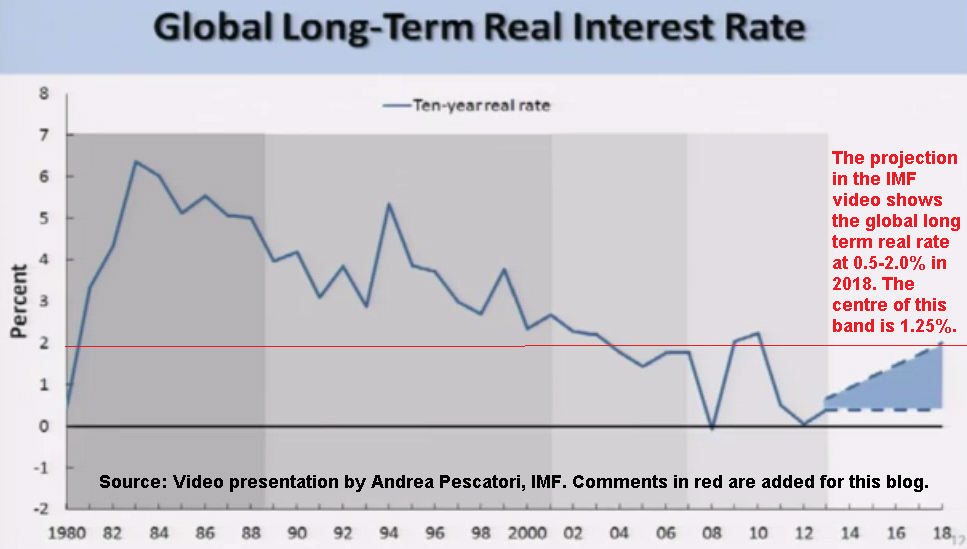 Interest rates have been falling since the early 1980’s to near zero today. According to the Financial Times columnist, Gavyn Davies, my main source for what central bankers are thinking, the International Monetary Fund identified three main reasons for the decline depending on the period:

Read more »
Posted by Roger McKinney at 8:33 PM No comments: Links to this post 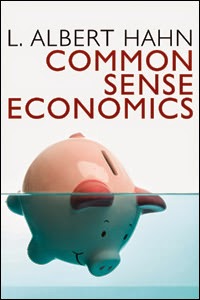 L. Albert Hahn, a great economist in the decades after WWII wrote Common Sense Economics because he thought that most mainstream economics had drifted into fantasy land as a result of the rise of Keynesian economics. I like the cover picture that shows a piggy bank sinking under water, which is what conventional investment wisdom will cause.

In section five on the stock market, Hahn wrote this:

“As every experienced market operator knows, success on the stock market depends decisively on the ability to go against the prevailing tendency, i.e., against mass opinion, at the very moment when its correctness is least in doubt. The ability to go against the prevailing tendency, however, presupposes in the first instance that the individual remains conscious of the persuasive influence of mass opinion on his own opinion. This, in turn, presupposes a correct assessment of its force. Everyday observation shows the strength of mass opinion to be very great indeed. It engulfs not only those who easily succumb to foreign influences but even those with normally detached views and sober judgment. An almost superhuman effort is needed to evade the influence of mass opinion-particularly in the , where price movements and thus the opinions of others are continuously reported to the farthest corners of the country by the ticker. The ticker assembles, as it were, all the buyers and sellers in one room. The ticker influences speculation as the flag influences troops. As long as the flag is carried forward, every single man knows that the others still have the courage and strength to go on, and this knowledge sustains his own courage and strength. Once the flag retreats, every man concludes that the others' courage and strength is waning. As he knows that he cannot advance alone, he, too, retreats, even though he would not himself be forced to.

“There is, of course, no general rule on how to counteract the influence of foreign opinion on one's own opinion. One of the most important aids for emancipation from mass opinion and its influence is to bear in mind that all prices are almost always necessarily wrong. It is further important to remember that mass suggestion wields its strongest influence when only one opinion is stated and discussion is prohibited. An experienced stock market operator will always listen with special attention to any arguments in opposition to the prevailing opinion.”

It’s old, but still good advice for investors. The time to follow the crowd is the period after the bull market starts until just before it ends. The crowd won't get out of the market until long after they have lost close to half their nest egg. Most individual investors don't get into the market until it has reached close to its top. The market is near its top today so successful investors will start rebalancing into cash or gold, but those who do will get a lot of criticism from most other investors. Being a good investor means learning to enjoy solitude.
From Common Sense Economics by L. Albert Hahn, : Abelard-Schumann Ltd., 1956, 213-214.

Posted by Roger McKinney at 8:39 PM No comments: Links to this post

The S&P 500 set a new record high today, April 2, 2014, which should make investors nervous. Here's a chart from my book Financial Bull Riding showing the close relationship between margin debt on the New York stock exchange and the S&P 500 through 2011. The data are monthly averages. 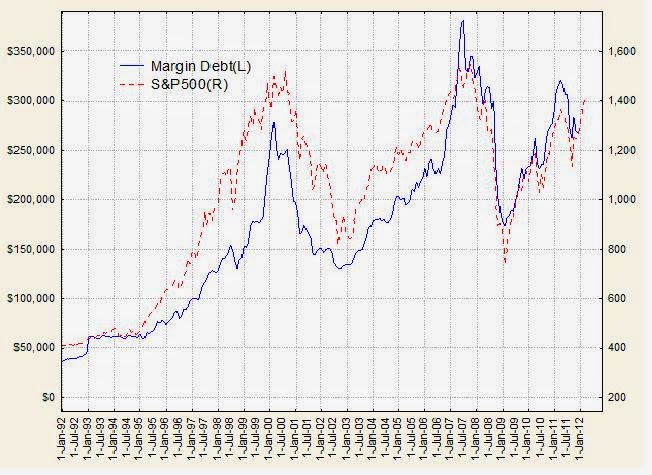 Read more »
Posted by Roger McKinney at 7:37 PM No comments: Links to this post