ABCT Investing is based on the Austrian business cycle theory, so I become mildly concerned when others criticize the theory. I never become seriously concerned because I have learned over the years that most critics are unbelievably lazy. If they bother to read Mises or Hayek they do so through the lenses of mainstream econ and fail to understand what the authors are actually saying.

The Social Democracy blog has posted a long diatribe against Ludwig von Mises, which I would normally ignore had Paul Krugman not advertised it. Krugman even gets wrong much of what the blog says, but the blog gets a few things wrong so here are my responses:

The blog is right that the “natural rate” of interest doesn’t exist. Of course, neither does “equilibrium.” Both are theoretical constructs to help us think about economics. Wicksell defined the natural rate as the rate of interest in a barter economy. Interest would exist if we were forced to barter goods because interest is nothing but the opportunity cost of giving up the use of something for a period of time. Austrian economists picked up on the idea as a useful way to explain how interest under barter differs from interest using money. It’s a teaching devise. But if you don’t like it you can ignore it. It helps teach the ABCT, but has little importance to the working of the theory.

Read more »
Posted by Roger McKinney at 7:15 PM No comments: Links to this post


“One important conclusion is that the probability that the S&P 500 index is currently in a bubble is only 20-33 per cent,” according to Gavyn Davies in his recent article for the Financial Times, “How to detect amarket bubble.” “But that could change fairly quickly during 2014 if the recent pace of advance in equity prices continues.”

Davies approves of the New Palgrave definition of a financial bubble:

Based on the Shiller cyclically adjusted p/e (CAPE), the probability of a bubble is estimated at 33 per cent in December 2013, while the price/dividend model produces a bubble probability of 20 per cent.


Read more »
Posted by Roger McKinney at 8:52 PM No comments: Links to this post

Here is the latest forecast of the S&P 500 index through Q2 2014 base on my own model. The values are quarterly averages because the model uses profits to predict the market and profit data comes out quarterly. 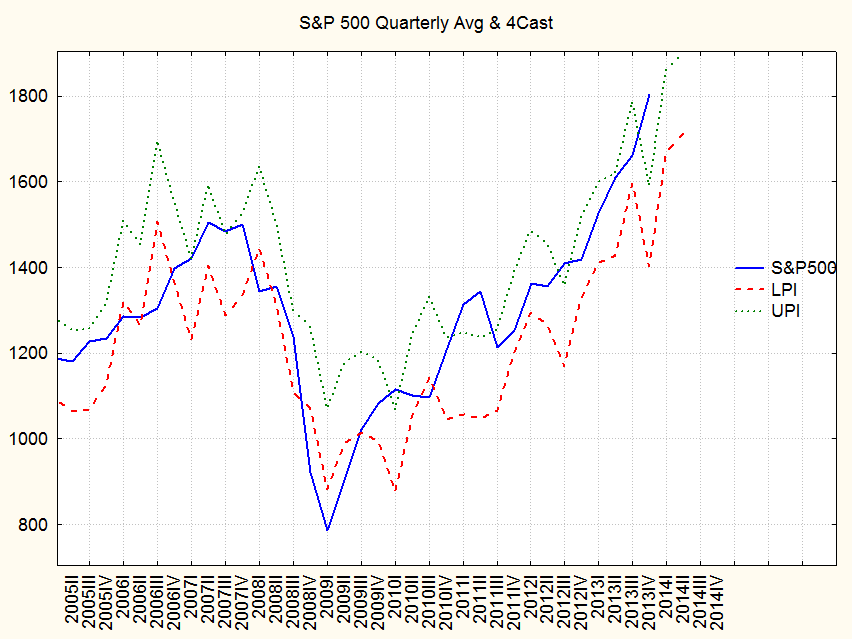 Read more »
Posted by Roger McKinney at 9:13 PM No comments: Links to this post


Size matters in investing as much as in other human endeavors. Bigger is better for most activities; Goliath usually defeats David. But financial economists have known for decades that small is the new big: investing in smaller firms increases investor returns a great deal over investing in the Blue Chips. Eugene Fama had to add firm size and value investing, to the Capital Asset Pricing Model to make it work.

Recently the journal of the American Association of Individual Investors carried an article in its January issue on the subject of firm size, “Exploiting the Relative Outperformance of Small-Cap Stocks” by John B. Davenport, Ph.D., and M. Fred Meissner. The conclusions are striking:

Read more »
Posted by Roger McKinney at 9:03 PM No comments: Links to this post


To the novice investor, the stock market and the real economy of the production of goods and services never meet. That is certainly to the mainstream economist for whom the stock market is a casino. But according to the great Austrian economist Ludwig Lachmann, the structure of production and the structure of a portfolio of securities are closely related:  “To understand how the two spheres of action interact is to understand how a market economy works.”[1] I guess that’s why mainstream economists don’t understand how a market economy works.

Here are excerpts from Lachmann’s Capital and Its Structure on how the stock market directs the real economy through cash flows determined by capital gains and losses:

Read more »
Posted by Roger McKinney at 9:31 PM No comments: Links to this post