Decades ago an old lady yelled, “Where’s the beef?” when handed a burger in a fast food commercial. It became a catch phrase for occasions when people wanted to advertise that an idea lacked substance. So while the media proclaims the virtues of the current economy, many economists are asking, “Where’s the growth?”

The Bureau for International Settlements (BIS), the central bankers’ bank, recently issued a report card on the efforts of their client central banks to boost growth since the last recession and given them a failing grade. In the report “Unconventional monetary policies: a re-appraisal,” the BIS economists wrote:

We reach three main conclusions: there is ample evidence that, to varying degrees, these measures have succeeded in influencing financial conditions even though their ultimate impact on output and inflation is harder to pin down;

The BIS economists diagnosed the failure of the medicine prescribed by mainstream economists for the economy as one of diminishing marginal returns, a microeconomics concept that all macroeconomists ignore. In other words, central banks counterfeiting money will produce the biggest bang for the buck in the first quarter in which they begin printing money. Additional benefits peter out rapidly after that until the banks are doing more harm than good:

We have already discussed the effect of persistently negative policy rates on banks (eg Borio et al (2015)). And such rates, and ultra-low yields more generally, also have a bigger debilitating effect on insurance companies and pension funds, whose liabilities have a longer maturity than their assets (eg EIOPA (2014)). The plight of pension funds is especially telling. It makes much more transparent the need for households to save more for retirement, which could weigh down on consumption (Rajan (2013)), and for sponsoring companies to replenish any underfunding, which could weigh down on investment.

The pension fund example highlights the broader possibility of counterproductive effects on confidence – hardly captured by the formal macroeconomic models used to estimate the effects by extrapolating from more normal times.

Vox recently posted the article "The big puzzle in economics today: why is the economy growing so slowly?" that examines the theme of growth. In it, economists have reluctantly confessed to the failure of both monetary and fiscal policies to produce the type of growth that the developed world is accustomed to:

Since 2009, inflation-adjusted output has barely grown at 2 percent per year. Business investment has been weak, wages have been stagnant, and worker productivity has improved at its slowest pace since World War II.

Like TV weathermen, economists have to generate explanations for economic storms, so they have worked up eight excuses why their policies are such miserable failures. Here’s the list:

Theory 1: We’re running out of innovations.

Theory 4: The economy is weighed down with debt.

Theory 6: There’s too much housing regulation in big cities.

Theory 7: The economy is becoming dominated by big, incumbent companies.

It would take too long to respond to each of these excuses. If you have been a parent you know that it’s easy for kids to ask questions such as “Why is the sun hot?” but the answer can take a while. Theories four and five have a lot to recommend them, but the rest are variations on mercantilism, socialism and confusing cause and effect. Bad economists are like a fog machine in a theatre; they hide a lot of things.

Cutting through the fog requires retreating to the better half of economics, micro. The BIS mentioned diminishing marginal returns, one of the foundations of micro. The tool that will help the most in explaining slow growth is the production possibility frontier showing the trade-offs between investment and consumption. Here is a typical one: 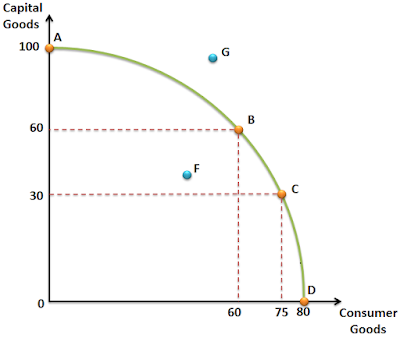 Growing the economy requires pushing the curve out so that we can investment and consume more at the same time. We do that by trading consumption (consumer goods), the same thing as saving, for more investment in new equipment and plants (capital goods) and hiring more labor. Doing the opposite, or consuming more, requires less investment and causes the curve to shrink inward. At least that’s how it would work in a free economy. We haven’t had free markets for almost a century in the US.

Almost everything the state does is consumption. Military spending, Social Security, Medicare, Medicaid, and all welfare programs are pure consumption. They move the economy down the curve toward more consumption at the expense of investment and cause the curve, and the economy to shrink. At the same time, taxes and regulations destroy much of the investment that manages to get past the state.

Finally, crushing regulation has made cartels, or oligopolies, of most industries by destroying small businesses. The lack of competition in those oligopolies destroys growth and innovation.

The answers to the question, “Where’s the growth?!” will come from microeconomics or not at all.
Posted by Roger McKinney at 6:58 PM