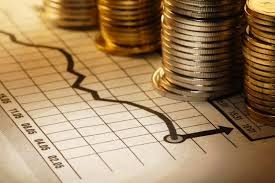 There has been a lot of press lately about institutional investors abandoning hedge funds. Conventional wisdom in finance tells us to compare fund performance with a benchmark, usually the S&P 500 index. That’s always a good idea, but the measure you use makes a lot of difference. The standard for decades has been rate of return. For example, the total return for the index in a given year might be 30% including price appreciation for the year plus dividends. Using that measure, few funds or investing strategies can beat benchmarks. That’s why conventional wisdom teaches us to buy a broad index and never sell until we retire. The assumption behind the philosophy is that earning a higher percentage means investors will have more money at the end of their investing life cycle.

With a buy-and-hold strategy that would be the case, but many fund managers don’t. They trade in and out of stocks and between asset classes. Why? Because they can often earn more money with lower returns. It’s counter-intuitive, but this is a true paradox and not a contradiction.
The key to earning more with lower returns is capital preservation. Everyone knows the power of compounded interest over the long run, but what we forget is the principle can work against us just as well. It does that in major market declines that last more than one year. For example, if the market declines 50% as it has done several times, and stays down for a year, a simple return the next year of 50% doesn't erase an investor’s losses. Because the base for calculating the increase has fallen by 50%, investors would need an increase of 100% to get back what he lost in the 50% decline.
Also, financial experts and most economists ignore the most important principle in economics – opportunity cost. If you hadn't lost the 50% in the market decline you might have earned say 20% in another asset such as bonds. But to keep the analysis simple, let’s ignore opportunity cost.
Many hedge funds avoided the 50% decline during the latest two market crashes. Maybe their funds fell by 10% or less. Often, hedge funds outperform the benchmark in terms of percentage returns only in such a major market collapse. But how do they do it? They hedge, hence the term hedge fund.
When hedge funds “hedge,” they do a variety of things. They can sell stocks and buy bonds or stay in cash. They can buy futures or options contracts that protect them in the event of a major decline. Or they can sell short some of the stocks they own. Hedges are nothing more than versions of insurance and as everyone knows who has bought insurance it costs. The extra cost of the insurance against a major market decline eats into returns and causes funds to under perform the benchmark in percentage terms during bull markets but outperform during the really bad years.
Now let’s switch to another type of benchmark. Let’s look at absolute dollars in your account. The difference in results can be quite dramatic. Here is a chart that compares hedge fund performance in percentages and absolute dollars that I got from Alexander M. Ineichen's book, Absolute Returns: The Risk and Opportunities of Hedge Fund Investing, and reprint in my book Financial Bull Riding. 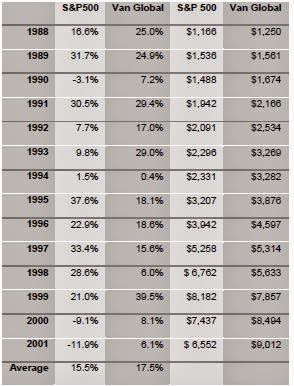 Notice that the Van Global index of hedge funds sometimes trailed the S&P 500 Index, especially in the years with really good returns. On average it just beat the index by a mere 2%. But the absolute dollars in the Van Global account is almost 50% larger. It’s not magic, just counter-intuitive like many good investing tools.
In previous posts I described several methods by which investment advisers that follow the Austrian School of economics time the market. Each method would have investors exit the stock market long before the top, causing them some embarrassment as the market continues to set new records. Still, investors who followed those methods would end up with much higher total dollars in their accounts than investors who stuck with a buy-and-hold strategy in an index. The secret is to avoid the big losses.

Clearly, investors can’t avoid every dip in the market, but it is possible to avoid the big ones that cause heart attacks. It’s time for investors to declare independence from the tyranny of standard benchmarks and focus on absolute returns. After all, that’s why we invest. Let the mainstream media and PhD’s crow about the percent returns of indexes while we quietly stash their losses in our accounts!
Posted by Roger McKinney at 7:20 PM