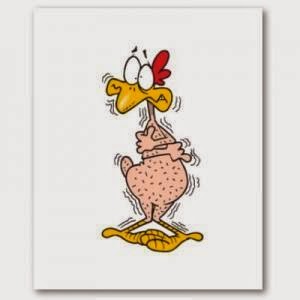 Plato once defined man to his followers as a featherless biped. Diogenes heard it, caught a chicken and plucked it then brought it to Plato saying, “Here is your man.”  I got that story from Jack Sparrow at the Mercenary Trader.
Was Plato wrong? No. Most men walk on two legs and most of us don’t have feathers, but that is a very simplistic model of what constitutes mankind and as a result has very limited application. The humor in the story comes from Diogenes stretching the model beyond its ability to describe the real world and drawing wrong conclusions.
Plucked chicken modeling happens in economics on a regular basis. Economics is about modeling complex events. If the model is too complex it becomes unwieldy and few can understand it. The trend in economics over the past century has been to create extremely simple models. The assumption of equilibrium that forms the foundation of mainstream economics is the most egregious example.


Then there is Paul Krugman’s babysitting co-op model. In it, parents pay each other to babysit their children using paper money they create, or Monopoly money. The money circulates among the parents as they hire each other to sit with their children. So what happens when one of the sets of parents decides to save some of the Monopoly money for say an extended vacation?  That act of saving takes money out of the co-op leaving some parents unemployed. Those parents don’t have money to pay others to babysit, so the system contracts with high levels of unemployment.
Modern Monetary Theory offers a similar model based on a family. Suppose the parents make coupons to give to their kids in exchange for the kids doing their chores. Then the parents tax the kids 10 coupons a week for the privilege of living in their house and eating their food. If the kids can’t pay the “tax,” then the parents punish them. Warren Mosler, the inventor of MMT claims this model describes the way money works in the modern world.
Mosler’s model is certainly accurate. The central insight of the MMT is that the government creates money out of nothing (It’s unimportant that the Fed is only a quasi-governmental organization); the state is a legal counterfeiter. That information shocks most of the students in the intro to economics class I teach because many assume that the US dollar is backed by gold while others assume it is backed by commodities and still others haven’t even thought about it. Most become a little angry that the state gives the Federal Reserve a monopoly on counterfeiting when they have to work hard to get their hands on small amounts of the money the Fed speaks into existence.
The knowledge that the Fed through the banking system can create money out of nothing is important for investors to keep in mind during recessions because much of that money will go into the stock market. I didn’t learn that from MMT, but from an old Austrian economist, Fritz Machlup, who was a friend of Mises and Hayek. While professor of economics at the University of Buffalo, NY, he wrote The Stock Market, Credit and Capital Formation, which was published in 1940. His book responded to economists who insisted on using regulators to direct the flow of new money created by the Fed into productive activity instead of into the stock market. Those economists seem to have suffered from a delusion that had the money created by the Fed in the 1920’s gone into manufacturing instead of the stock market then the stock market crash of 1929, and therefore the Great Depression, would never have happened.
Following Keynes, economists wanted to keep interest rates near zero in order to spur investment in manufacturing but they felt the “casino,” as Keynes called the stock market, defeated their ingenious plans by syphoning off the money. For those paying attention, this is the same argument many economists are making today about “macro prudential” regulations. They never read Machlup, to their poverty and shame.  Essentially, Machlup instructs them that 1) stock market investment is very productive and 2) regulators can’t do what economists want them to do because money is fungible and will go where people want it to go regardless of what regulators do.
So yes, the central insight of MMT is correct. The state, through the Fed, creates money out of nothing and has an endless supply of it. As long as interest rates are relatively low by historical standards, the stock market will rise as investors borrow on margin to invest and companies borrow to buy back their own stock.  If perma bears could grasp this they could make a lot of money in the good years before the bust, but I think perma bears enjoy misery.
However, we have reached the limits of Krugman’s and Mosler’s simplistic models of the economy because the economy is more than money. That is the reason most of the conclusions drawn by MMTers about government debt and private savings depending on it are wrong.  The economy is real people making things and providing services. Money does nothing but make their work a lot easier by reducing transaction costs. If things go wrong in the real economy, the money part, including the stock market, will crash regardless of what the Fed or government does. That insight is the essence of Austrian economics, especially Hayek’s contribution in the Ricardo Effect: money expansion initiates the business cycle while the real economy ends it.
Neither Krugman’s babysitting co-op, nor MMT nor will anything in mainstream economics or finance prepare investors for collapses in the stock market brought on by miscalculations in the real economy. And what causes those miscalculations? The distortions in prices induced by the Fed’s counterfeiting. When businesses miscalculate profits fall, and when profits fall so does the stock market.
I have read several articles in which the authors claim that MMT has successfully guided them in making investment decisions, but they’re short on detail. Of course, they may be trying to keep their competitive advantage a secret. I’m open to learning new things so I hope anyone who has successfully used MMT as a guide to investing will let me know how or point me to links that describe it. Otherwise, I’m skeptical because the theory gets so much about the economy wrong.
Posted by Roger McKinney at 8:23 PM