Death of retail is premature 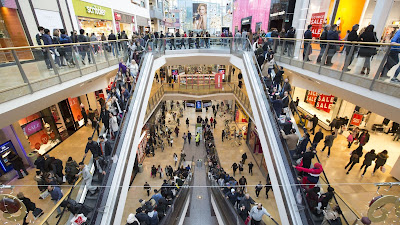 Does anyone remember Montgomery Wards? What about TG&Y? Wikipedia has a longer list of dead brands here. That Sears, K-Mart and many other brands wither in retail hospice is frightening to many:


The amount of retail space going dark in 2018 is on pace to break a record, as companies with massive floorplans are either trimming back their store counts or liquidating entirely... Since 2008, commercial real estate services firm CoStar Group has been tracking the amount of retail square footage slated to close annually. Already in April, more than 90 million square feet of space is expected to be vacated, including Bon-Ton's stores, in 2018. That's easily on track to surpass a record 105 million square feet of space shuttered last year, said Suzanne Mulvee, a senior real estate strategist at CoStar. All it will take is another handful of closures.”


On the other hand, another author writes that there are good reasons why most chains are in trouble and the stories about the retail apocalypse are just click bait:


If we’re to believe these articles, we’ll all be buying from Amazon.com, and malls will become old age homes for Baby Boomers. And the rest of us should just close up shop now, and put an end to the pain.

Sears and Kmart – Two chains (one holding company) that have struggled to find their identities for more than a decade, and who have been run by someone with no retailing experience at all are closing stores. Are we surprised?

RadioShack – Seriously? I’m sort of shocked it even got the opportunity for another go-round. Why should that chain exist anymore?”

And the rest of the story is that ecommerce is still only around 10% of total and some retailers are expanding. Amazon bought Whole Foods and is opening other stores. Nineteen chains have announced the opening a total of 2,861 stores.


Some iconic names include Dollar General and Dollar Tree, Autozone, Ulta (flying off the charts, by the way), Kroger, TJ Maxx and many others across multiple segments.

We are witnessing in retail the “creative destruction” of capitalism described by economist Joseph Schumpeter. A lot of people don’t like the rapid pace of change induced by competition and those people turn to various socialist schemes for comfort, such as distributism.

Those same people tend to fear big business, so why they lament the decline of former behemoths is a mystery. The size of companies is one of the reasons for their demise. As businesses become bigger they begin to operate more like socialist states. Most people think the problem with socialism is incentives: people won’t work. But Ludwig von Mises pointed out almost a century ago that the real problem with socialism is the “calculation problem.” [link https://mises.org/library/socialism-economic-and-sociological-analysis] Mises wrote that without accurate prices, socialist governments cannot allocate resources efficiently. Hayek added to Mises’ insight the knowledge problem, which says that the information that drives the market is scattered among millions of workers and entrepreneurs on the ground where the action takes place. Socialist states can’t gather all of that knowledge into one place and if they could, they couldn’t analyze it because there is simply too much of it.

When businesses grow large, as Sears did, management is too far from the action and can’t get the information it needs and can’t analyze it in the way smaller entrepreneurial firms can. Often the data is old by the time it reaches the oxygen scarce levels of upper management. Management becomes bureaucratic, like government. Every decision becomes political. The leviathans of business fall behind in technology and management practices. As sales decline, managers become control freaks when they should be pushing decision making to lower levels.

Much of that happens because management becomes arrogant. I remember reading in the early 1990s that Sears wasn’t afraid of Walmart because Sears’ customers were too loyal and management was too smart for the hillbilly from Bentonville, AR.

Decades ago Fortune magazine carried a story on how to survive in corporate culture. It suggested that people should always and frequently declare the success of their projects because most have vague goals and poor measurement. Who knows if it succeeded? That way management will associate success with you. Besides, there is an unwritten code that if I don’t criticize your project’s success you won’t criticize mine.

Also, find ways to tell your boss about your successes because bosses rarely pay attention to the workers below them; they’re focused on pleasing their boss. They don’t know who is a good employee or who is a serial killer. The more modest employees will just seem like failures.

The lesson in retail is don’t become attached brands. At some point they all will fail. And don’t become a socialist because the store you loved as a teenager has disappeared. You may achieve stability, but at the cost of everyone becoming poorer.
Posted by Roger McKinney at 7:09 PM