Reality mugs mainstream economist – what it means for investors 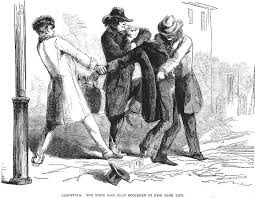 A conservative is just a liberal (socialist) who has been mugged by reality. Reality can sometimes change an old economist, too. That happened to Richard Bookstaber and he writes about it in his latest book The End of Theory: Financial Crises, the Failure of Economics, and the Sweep of Human Interaction.

Bookstaber, a Ph.D. in economist from the Massachusetts Institute of Technology, ran risk management for Morgan Stanley, Salomon Brothers and Bridgewater and worked at the Treasury Department and the Securities and Exchange Commission. He is now the chief risk officer for the investments office of the University of California. Not a bad resume. He has a message for mainstream economists – the weakest part of mainstream economics is the math:

We are not robots with fixed, mechanistic responses to inputs. We face a changing world that, in turn, changes the context with which we view the world, and that changes us, again all the more so during periods of crisis. The critical implication is that we cannot plug numbers into a model and solve for the future. We cannot know where we will end up until we take the journey. And we cannot retake that journey once completed.

The point isn’t to crank out and act on a number. It is to set up a model to see what light can be shed on a real-world problem, and to see if it can fit a larger, intuitive narrative about what is going on . . . is the plot line a reasonable one?

If you can model it, you’re wrong.

Mises began making the same points almost a century ago, continuing to repeat it for 60 years and Hayek echoed him for decades beginning in the 1920s. But mainstream economists have always found reality irritating. Milton Friedman insisted that models don’t have to be realistic to be useful. And Harvard economist Dani Rodrik wrote in his Economic Rules: the rights and wrongs of the dismal science that the math models are the Higgs boson that converts gaseous prose into science.

Economists have objected to it – to the neoclassical construction it has brought about – on the grounds that it posits an idealized, rationalized world that distorts reality, one whose underlying assumptions are often chosen for analytical convenience.

However, complexity economics, like behavioral economics, has yielded little benefit for enormous costs. Bookstaber’s solution is to embrace agent-based modeling, which is more computer algorithm and less calculus. It attempts to create agents that act more like real humans than the agents of mainstream models.

A few Austrian economists have warmed to agent-based modeling. But the modeling comes infected with the same dangers that hinder mainstream math models from coming into contact with reality: if they get the assumptions about human behavior wrong, the models will still be wrong and produce faulty results. Bookstaber has already started on the wrong foot by drawing on the disciplines of chaos theory, network theory, physics, and biology as his guide. But humans don’t act like the subjects of any of those disciplines. They act like humans. That’s why Mises titled his great book on economics Human Action.

Bookstaber’s major concern is relevant for investors: what impact will the massive increase in quantitative trading (Q-trading) have on the market? Some estimate that Q-trading programs do as much as 70% of all trading. We have already witnessed crashes caused by Q-trading. The 1987 and 2010 flash crashed happened because all of the programs in use wanted to make the same trades. The Long-Term Capital Management fiasco came from Q-trading by two Nobel-Prize winning economists.

Q-trading is good for the market most of the time because it is based on arbitrage, or getting rid of small anomalies. They make the market more efficient by vacuuming up huge volumes of pennies. But disasters happen at turning points, mainly the point at which a bull morphs into a bear or when an expansion transforms into a recession. No mainstream economist has any idea how or why that happens. Only Austrian economists get it.

The numbers of strategies for Q-trading aren’t that large. Most are singing variations on the same tunes. That’s why when something explodes, what Nassim Talib calls a black swan, all Q-trading programs tend to head for the fire escape at the same time.

The stock market is currently flying at altitudes that cause vertigo from lack of oxygen. When something breaks and the market starts descending, the last thing we need is for computers to push the throttle to full speed ahead and increase the angle of the dive. But that is what computers tend to do. There are very few contrarian computers out there. They just don’t have the guts for it.
Posted by Roger McKinney at 8:17 PM