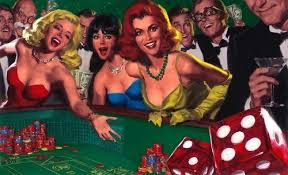 In May of this year The Atlantic offered another hymn to the goddess of luck. Not only is worshiping the goddess a good thing according to the author, but agnostics are stingy and selfish:

Seeing ourselves as self-made leads us to be less generous and public-spirited...

A recent study by the political scientists Benjamin Page, Larry Bartels, and Jason Seawright found that the top 1 percent of U.S. wealth-holders are “extremely active politically” and are much more likely than the rest of the American public to resist taxation, regulation, and government spending. Given that the wealthiest Americans believe their prosperity is due, above all else, to their own talent and hard work, is this any wonder? Surely it’s a short hop from overlooking luck’s role in success to feeling entitled to keep the lion’s share of your income—and to being reluctant to sustain the public investments that let you succeed in the first place.

Traditionally, religion explained what we couldn’t understand. Today, it’s randomness. Choosing randomness, or luck, is a description, not an explanation of a phenomenon, and an admission of ignorance. There are quite a few books promoting the goddess of luck. Keynes blamed recession on the “animal spirits” of businessmen, an allusion to randomness and not pagan beliefs. Nassim Taleb’s books on black swans was my first introduction to her. Then I read Burton Malkiel’s A Random Walk Down Wall Street: A Time-Tested Strategy for Successful Investing. Recently, The Drunkard’s Walk: How Randomness Rules Our Lives by Leonard Mlodinow came out.
Adoration of the blessed Lady Luck, and she is no virgin, is a new religion. It began with the French Revolution. Hayek records the history in The Counter-Revolution of Science: Studies on the Abuse of Reason. The deists and atheists of the Revolution intended to toss out Christianity as well as the monarchy. They replaced Christianity and its God with reason and science. The modern founder of socialism, Saint-Simon, created his own religion based on the worship of science.

Physicists in the 19th century had discovered the normal distribution popping up all around them and found it useful to explore and predict random events. It was only a matter of time until someone applied the statistics to human events. The first person known to have done so was a young math student in Paris, Louis Bachelier, who wrote a dissertation in 1900 applying the normal distribution to price movements on the stock exchange. The dissertation would become buried until more than half a century later when it helped spark a revolution in financial economics.

In 1956, Paul Samuelson, writer of the most popular economics textbook in US history and MIT professor, resurrected Louis Bachelier’s 1900 dissertation, Theorie de la speculation. Samuelson reformed Bachelier’s math by switching the predicted variable from stock prices to percentage changes in stock prices. This allowed for a mean of zero with negative values (losses) on the left side of the mean.

As a result, stock prices, recessions, success and many other phenomena are considered random events in mainstream economics today. Entrepreneurs merely observe from the sidelines. But there is little evidence that those events are the result of random processes. At best, statisticians can do little more than demonstrate that a random number generator can produce patterns similar to those in which others see human causes.

Nicholas Vardy gave an example in his post, “Why Lady Luck Prevails Over Expert Analysis,” drawing from the book Success and Luck: Good Fortune and the Myth of Meritocracy by Robert Frank of Cornell University. Frank used something like Monte Carlo simulation and the assumptions that 40% of success comes from ability, 40% from effort and 20% from luck. He ran the simulation 100,000 times (enough to impress the naïve) and found that ability plus effort produced winners just 5% of the time. Frank’s conclusions:

The other 95% of the time, the less able and less hard working were the winners of the game. Put another way, even if you accept that 80% of your success is due to talent and hard work, it’s the remaining 20% that determines who actually comes out on top. Talent and hard work are necessary, but not sufficient to win in the game of life.

Now that looks like proof to anyone who knows little about statistics, but it’s not. It’s as far from reality as scientism can get. Does anyone really believe that he has as great a chance of becoming Bill Gates by dropping out of school in sixth grade and waiting for his number to come up as does someone who goes to school and works hard at programming?

Dr. Thomas Stanley showed in his book The Millionaire Next Door that about 85% of American millionaires got their wealth by growing businesses over 30 years. Does that appear like a random process to you?

Consider the great lottery of birth. Who gets to choose their parents? No one, obviously. The Atlantic wrote:

The one dimension of personal luck that transcends all others is to have been born in a highly developed country...

Being born in a favorable environment is an enormous stroke of luck. But maintaining such an environment requires high levels of public investment in everything from infrastructure to education—something Americans have lately been unwilling to support...

But what assumptions lie behind that assertion of luck? It can only work if a big bucket of human souls exists somewhere in the spirit world and when babies are born in the flesh the inventory of souls gets assigned to them randomly. But that’s one weird religion. Children are always the result of intentional behavior of their parents. There is nothing random about it. And if the children get a good education, it’s because their parents intended them to. Yes, some people get more help than others, but that’s not the same thing as a random process.

Socialists launched scientism as part of their religion to reform human nature, so it’s no surprise that the main worshippers of lady luck are socialists as well. They use the excuse of randomness to promote “social justice.” Their reasoning goes like this: if everyone succeeds only due to the touch of the goddess of luck, then they don’t deserve their success and should share it with those whom the goddess favored less. Of course, the state is the temple guard and muscle.

Most of all, the stock market is not a random process. The great Austrian economist Ludwig Lachmann demonstrated that the stock market is the primary means for guiding investment in a free market. Capitalists use it to reward success and punish failure. The stock market is not a casino, as Keynes claimed. In the long run the prices of stocks follow profits closely with adjustments made for risk tolerance on the part of capitalists. In the short run, say less than six months, it responds to capitalists’ varied expectations of where profits are headed.

Don’t get caught up in the worship of lady luck. It will cause investors to lose large sums of money in a bear market through a buy-and-hold strategy because you think no one can know when a bear might pop out of the woods. The high priests of the goddess of luck try to confuse investors by insisting that if they can’t predict the day and hour in which a bear market will begin then they are failures. However, being early, even a year, is much better than being mauled by a bear.

As for the burden of guilt that the Atlantic author tries to use to crush successful people, keep in mind that the most successful people have left most of their wealth to charity. Remember all of the Carnegie libraries? Bill Gates and Warren Buffet have created the largest charity in history by contributing billions to the Gates Foundation. How did all of the large foundations, such as the Pew and Rockefeller, that peddle socialism in the US get their billions if not from highly successful people?

And don't get mired in the mud that socialists sling when they claim that successful people haven't worked hard enough for the money they earn. Only entry-level workers through mid-level management get paid for how hard they work. Upper management and CEOs get paid for what they know. After all, no one hires a football coach to do the blocking and tackling on the field, but for his ability to teach those and his knowledge of strategy.
Posted by Roger McKinney at 8:42 PM