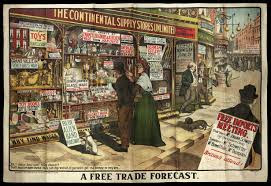 Good economists, that is, free marketeers, are appalled by Republican nominee for President Donald Trump’s attacks on free trade. All of us have examined and approved David Ricardo’s theory of trade and comparative advantage. Trade is not a form of war. Exports do not enrich a nation any more than imports impoverish it. It does not matter if the trading partner isn’t playing “fair.” Trading even with a communist country will benefit the home nation.

As Mises wrote in Omnipotent Government, “...the inference from Ricardo’s free-trade argument was irrefutable. Even if all other countries cling to protection, every nation serves its own interest best by free trade. Not for the sake of foreigners but for the sake of their own nation, the liberals advocated free trade (OG 75).”
However, something rarely considered is the effect on the home nation if it is socialist. Does it make a difference? Mises argued that it did in Germany. In Omnipotent Government and Human Action, Mises told the story of Germany’s plunge into socialism in the last decades of the nineteenth century. Pro-labor legislation, minimum wage and powerful unions artificially elevated wages for workers. Politicians raised taxes on businesses to pay for social security and other welfare programs. Those policies inflated the costs of doing business in Germany and put German businesses at a severe disadvantage in competition against cheaper imports. The only salvation for the socialists was tariffs.

If the Germans had been in a position to renounce the export of manufactures and to produce only for the domestic market, the tariff could have sheltered the German plants against the intensified competition of foreign business. They would have been in a position to reap higher prices. What the wage earner would have profited from the achievements of the legislature and the unions, would have been absorbed by the higher prices he would have had to pay for the articles he bought... The tariff would have rendered the Sozialpolitik harmless in preventing a spread of unemployment (HA 363-4).

But Germany lacked the farmland to feed its people and needed to sell manufactured goods to pay for imported food.

As has been pointed out above, such a surplus production renders a protective tariff ineffective. Only cartels could free Germany from the catastrophic consequences of its ‘progressive’ prolabor policies...The cartels are the necessary accompaniment and upshot of a ‘progressive’ labor policy as far as it affects industries dependent on foreign markets. The cartels do not, of course, safeguard for the wage earners the illusory social gains which the labor politicians and the union leaders promised them. (HA 364).

The cartels charged high prices at home that subsidized prices for their products in foreign markets and paid for the welfare policies the people demanded. “But the most disastrous effect of minimum wage rates, permanent mass unemployment, was at first avoided (HA 364).”

The socialist policies were disastrous for the German economy, so socialists blamed capitalism.

The greater part of public opinion did not suspect at all that Sozialpolitik and protection were closely linked together. The trend toward cartels and monopoly was in their opinion one of the many disastrous consequences of capitalism. They bitterly indicted the greediness of capitalists... The much glorified Sozialpolitik was only possible within an economic body sheltered by tariffs (OG 77).”

In order to see why free trade harms a socialist nations’ wealth, we have to remember how free trade both harms and benefits. It harms those workers whose products cannot compete with cheaper imports. In the US, clothing manufacturing would be a good example. Sewing clothes is a labor intensive process and is difficult to automate with machines. US workers earn wages too high to compete with workers in poorer countries like China, Thailand and the Philippines.

Cheap imports hurt workers in clothing manufacturing when they lose their jobs, but the rest of the country enjoys a higher standard of living from cheaper imports. In a free market at home, entrepreneurs would quickly replace those lost jobs with new and better ones offering products for consumers to spend their new wealth on. But in a socialist economy, like that of Germany from 1870 until after WWII, socialist polices absorb that new wealth in higher taxes and prices for existing goods and services, while the increased cost of business prevents the creation of new jobs. Socialism prevents the benefits of trade while magnifying the damage to uncompetitive industries.

Mises covered the same ground again in his section on state intervention in the economy with an example of two fictional countries, Ruritania and Mauretania. Ruritania implements pro-labor legislation that restricts working hours. Production falls; prices rise. Mauretanians take advantage of those rising prices to increase exports to Ruritania, but Ruritanians notice the loss of jobs by their countrymen and impose a tariff on Mauretanian imports to protect their workers. Mises concluded,

The main function of tariffs and other protectionist devices today is to disguise the real effects of interventionist policies designed to raise the standard of living of the masses. Economic nationalism is the necessary complement of these popular policies which pretend to improve the wage earners' material well-being while they are in fact impairing it (HA 748).

The US today is far closer to socialism than a free market. Some economists call our system fascist, one of many varieties of socialism. Socialist policies have destroyed the ability of businesses in the US to create new jobs at a rate high enough to employ as many citizens, let alone immigrants. So while official unemployment may be low, under five percent, that has happened because so many workers have become discouraged and are not counted as unemployed. The working age population has shrunk to its lowest level in a generation. Corporations are buying back their own shares of stock instead of expanding and hiring more people.

In contrast, compare the golden age of economic freedom in the US, the period from the Civil War until WWI. Standards of living and wages grew at rates rarely seen since then even as immigrants flooded into the country from around the world.

In the short run, Trump’s anti-free trade policies may not hurt the US economy. They may slow the rot caused by a century of metastasizing socialism in the US, but they can never stop it.