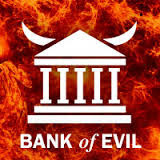 The outlaw couple Bonnie and Clyde was not only famous for their bank robberies in the 1930s, they were popular. They lost some of their appeal when they began murdering policemen, but people loved the fact that they robbed banks because the people hated banks. They had watched banks foreclose on farm families during the Dust Bowl and depression. Committing the economic sin of fixating on the seen while ignoring the unseen, an error first identified by the great French economist Frederick Bastiat, they blamed the bankers for the farming disasters.

People have loved to hate bankers for centuries, often for good reason. Until the creation of the FDIC, depositors occasionally lost their life savings to bank failures. Now they don’t, but the people see banks constantly bailed out by governments when they make bad decisions and then foreclosing on borrowers who have made decisions that were no worse.

So it was no surprise that the movie The Big Short blamed greedy bankers for the recent Great Recession. I reviewed the book on which the movie was based, Michael Lewis’ The Big Short: Inside the Doomsday Machine, here. As I noted then, Lewis’ economics is terrible, but the book is a great read because at its heart it glorifies the difficulties, hard work and genius of entrepreneurs and the heroes of the film are entrepreneurs.
All entrepreneurs are speculators attacking an unknown future. While the rest of the financial world had gone slightly nuts over mortgage backed securities these entrepreneurs were trying to bring them back to earth. So the film get the role of speculators right, too, which is a rare feat in Hollywood.

Even though the entrepreneurs made a boat load of money on their investments, they were wrong about the causes of the financial crisis. They attributed the crisis to the fact that banks were lending money to people who couldn’t repay the loans and as a result would default on many of the mortgages. Yes, many of the bonds that bankers created from pools of mortgages contained NINJA (no income no job or assets) mortgages. Those mortgages were the consequence of bankers trying to obey federal laws about home lending.

But the bad loans did not shoot down the economy. There weren’t enough of them to do that. It makes a good movie: greedy bankers profit from making stupid loans and destroy the financial system. And it feeds the public’s millennia-old hatred of bankers. It just isn’t true.

Here’s why. In my book, Financial Bull Riding, I reprint an interview with economist Eugene Fama from New Yorker magazine on the financial crisis:

So what is your explanation of what happened?

What happened is we went through a big recession, people couldn’t make their mortgage payments, and, of course, the ones with the riskiest mortgages were the most likely not to be able to do it. As a consequence, we had a so-called credit crisis. It wasn’t really a credit crisis. It was an economic crisis.

But surely the start of the credit crisis predated the recession?

I don’t think so. How could it? People don’t walk away from their homes unless they can’t make the payments. That’s an indication that we are in a recession.

So you are saying the recession predated August 2007, when the subprime bond market froze up?

Yeah. It had to, to be showing up among people who had mortgages. Nobody who’s doing mortgage research—we have lots of them here—disagrees with that.

So what caused the recession if it wasn’t the financial crisis?

(Laughs) That’s where economics has always broken down. We don’t know what causes recessions. Now, I’m not a macroeconomist so I don’t feel bad about that. (Laughs again.) We’ve never known. Debates go on to this day about what caused the Great Depression. Economics is not very good at explaining swings in economic activity.


Contrary to Fama’s last statement, some economists, those who follow the Austrian business-cycle theory, do understand what caused the Great Depression and most recessions in world history.

Yes, many bankers packaging bad mortgages knew those borrowers would default soon and damage the value of the bonds, but Lewis is unaware of what was happening in mainstream economics at the time concerning theories of risk. Everyone knew that banks had mixed bad mortgages into the bonds and some bonds contained almost nothing but bad mortgages. But the reigning dogma about risk in mainstream economics insisted that if they spread risk around among enough people defaults would do little harm. Mainstream economists had encouraged the proliferation of all kinds of derivatives for decades in the expectation that they would provide insurance against all disasters and so stabilize the economy.

So here’s what really happened. The Fed kept interest rates too low for too long after the mild 2001 recession because the recovery after it had been jobless. Those low rates blew a housing bubble as part of the expansion phase of the business cycle. Hayek’s Ricardo Effect kicked in and nuked the expansion. As the recession expanded, people quit buying new houses and caused the value of real estate to collapse. The dive in real estate values and increasing defaults on mortgages made the bonds created from them worth less, though not worthless.

Investment banks such as Goldman Sachs had been using mortgage backed bonds as collateral for short term loans, but when lenders, such as money market mutual funds, realized that the value of the collateral had fallen, they demanded higher rates for the loans and in some cases refused to lend at all. That caused an old-fashioned bank run at investment banks as the lenders pulled their money out. The short term lenders were the equivalent of depositors at commercial banks. Gary Gorton describes the process well in his brilliantly named book, Slapped by the Invisible Hand.

So go see the movie. But ignore its explanations of the crisis. Concentrate on the brilliant work of the entrepreneurs who risked their businesses, wealth and reputations and made fortunes in the process while others lost fortunes.

Posted by Roger McKinney at 7:29 PM