Abenomics' big fail and the sinking of the rising sun 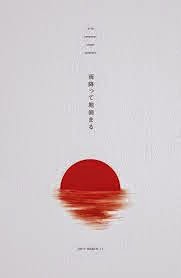 Economists predicted a 2.25% gain in Japan’s GDP after the 7.3% fall in the second quarter. As usual, they missed it again. Japanese GDP fell 1.6% last quarter according to initial estimates. Mainstream economics’ theory of business cycles states that such downturns in the economy are random events, shocks to equilibrium. As the London School of Economics told the Queen, they had successfully predicted that no one can predict the onset of the worst recession since the great one. Still, they crank out GDP forecasts as if they could predict a recession. They irony is huge, but apparently unnoticed by most of the profession.

However, the most important part of the story was that Prime Minister Abe has been conducting a major monetary policy experiment. He promised to boost nominal GDP and achieve a minimum inflation of 2% by printing as much money as was necessary. No limits. Paleo-Keynesians like Paul Krugman were giddy.

Abe also promised to reduce the deficit through tax increases and reform the structure of the economy. Partly as a result, the Japanese stock market climbed 55% and the value of the Yen fell 25% in 2013.

Now the Japanese economy has spent two quarters of 2014 in purgatory. Of course, mainstream economists will cover their backsides by insisting whatever Abe did in Japan just wasn’t enough and he will have to do more in the future. Most are blaming the modest tax increase. But here are two points to rescue and hide in your memory: 1) Monetary printing cannot prevent recessions and 2) mainstream economists cannot predict recessions.

Keep those in mind as mainstream economists predict nothing but sunny skies and smooth flights for next year. And where the economy goes the stock market leads. 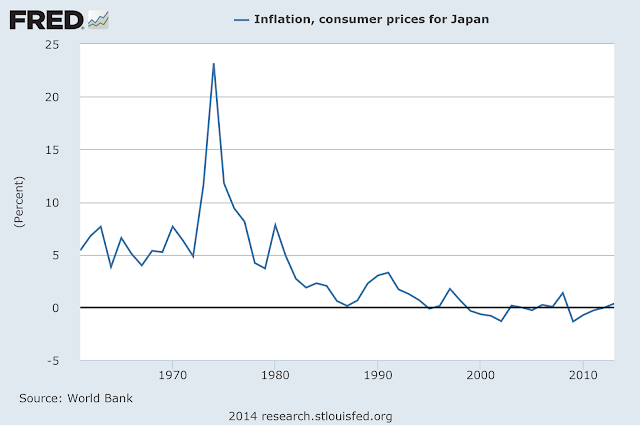 In the fantasy land of mainstream economics deflation turned the recession of 1929 into history's worst depression. Even low levels of of inflation, called disinflation, terrifies them. Based on the chart above, the Japanese should be miserable people. But take a look at this chart: 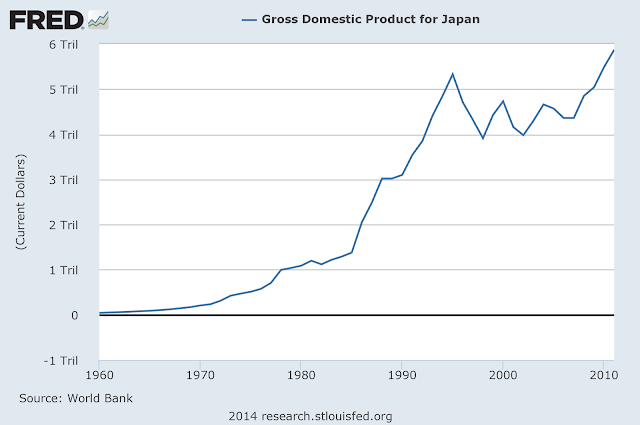 Nominal GDP, or GDP not deflated for inflation, hasn't done too badly. The decade from 1995 to 2005 was a little rough. Now let's adjust the GDP for inflation and deflation to get the real GDP. Even mainstream economists understand real GDP is the better measure of how well the economy has done: 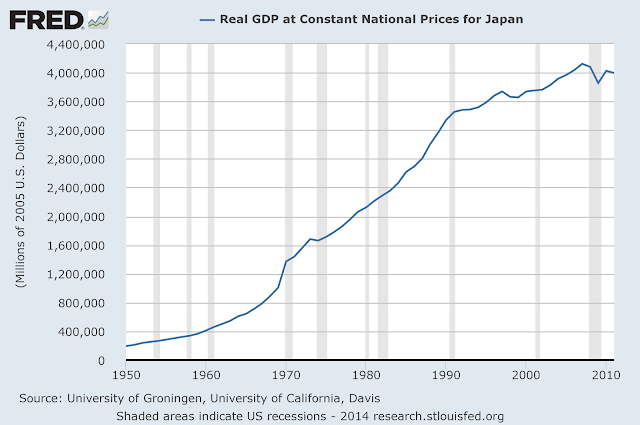 Not bad, huh? Japan has done no worse than the US. Now let's look at the graph that really matters to Japanese and should matter to economists, the per capita GDP of Japan: 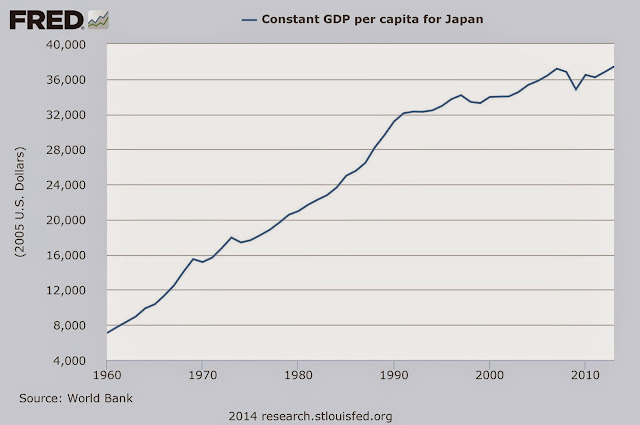 Real per capita GDP measures how wealthy people are becoming. It's the best measure of standards of living, though socialists hate it and want to replace it with measures like per capita happiness. The latest recession destroyed wealth in Japan just as it did in many countries, but the nation bounced back quickly and the people are wealthier than ever. Everyone should suffer so much!
Posted by Roger McKinney at 8:47 PM