Why we have a trade deficit with China 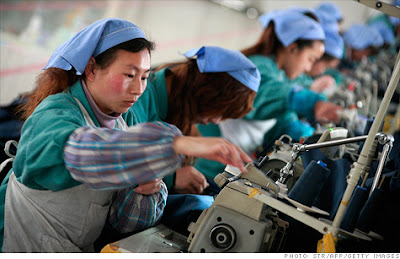 President Trump has said that the US trade deficit with China should have been “fixed” years ago. I agree, but for different reasons. Why do we run a deficit in trade with China?

The administration wants China to quit violating our copyright and patent laws, stop stealing our technology and forcing companies doing business in China to share technology. But what does that have to do with a trade deficit? We buy mostly consumer goods from China that are made using low tech, labor intensive processes. And why would we expect China to enforce our laws? Anyway, all countries since World War II have grown by importing better technology from the West. Japan was first. We should want that to happen so their people can grow out of poverty.

Some have accused China of being a currency manipulator, meaning that they keep their yuan artificially low in exchange for the US dollar so that their products are cheaper for Americans. That may have been true in the past but China has allowed its currency to float on the market for years and it has still drifted lower. Besides, no country in the world manipulates its currency the ways the Fed does the US dollar.

Even the fact that wages are lower in China doesn’t contribute a lot to the deficit because wages are only a part of the cost of goods. Productivity is the major factor. In total labor costs, including how much workers can produce, US workers hold their own with Chinese workers in many areas. The US can’t produce consumer goods that require a lot of cheap labor, such as clothing, because of our minimum wage laws. Get rid of the minimum wage and some of those jobs will return to the US, but do we really want them?

The US couldn’t run a trade deficit with any other nation if money didn’t exist and we had to barter for everything. In that case we would have to pay for imports with exports of an equal value on the spot. Trade deficits can only exist with money. Even with gold coins as money, and no credit, we could export gold coins to pay for Chinese goods and immediately have a trade deficit. But as soon as gold became scarce we would have to stop importing and the deficit would disappear.

The fear of trade deficits arose in the middle ages when kings needed gold coins to pay their armies that they kept engaged in continual wars. Kings saw the gold they coveted leaving the country in exchange for goods, such as wine and wool. They wanted to keep that gold in their country so they could steal it from their citizens and have the gold to keep the wars going. Courtesans and other groupies of the king convinced people that imports impoverished them and not just the king, even though the gold leaving the country brought in goods the citizens valued more than the gold. The groupies deceived the common man into believing that money, and not the goods we buy, is wealth.

Persistent trade deficits can only happen with paper money, and mostly with credit, or digital money because governments can create as much of those fiat moneys as they want. They never reach scarcity. Ludwig von Mises, the greatest economist of the 20th century, used to remind us that when households get more money than they want to save or hold as cash, they spend it. Countries do the same. When the money creating machine, the Federal Reserve, “prints” more money than the nation wants to hold, the people spend it overseas by importing goods. So the Fed is one cause of trade deficits.

The other is the federal government. This cause is more complex and involves an econoptical illusion. When the state runs a deficit, that is, spends more than it receives in taxes, it has to borrow to pay its expenses. In the past the state borrowed from US citizens by selling them bonds, treasuries, notes, etc. But the federal government’s gluttony has become so large that US citizens can’t save enough to feed the beast. The insatiable hunger of the state forces it to look overseas and consume the savings of other nations.

Who saves enough to satisfy a glutton like the federal government? Not, Europe. Except for Germany, it has the same problem as the US. Germany and Japan help by buying some of our debt, but the state is too hungry for them to satisfy. That pretty much leaves China, which has a very high savings rate and a lot of savers even though the Chinese people are much poorer than US citizens. There is a problem, though. Chinese save in yuan and the federal government needs US dollars. Iran and North Korea counterfeit US dollars, but so far China hasn’t entered that business, so how will China convert their yuan savings into US dollars?

The answer is that they will use their yuan savings to make things that US citizens will buy from them with US dollars. Then they can loan those US dollars to the federal government. The Federal Reserve makes sure that US citizens have the extra dollars to buy Chinese goods by expanding the money supply beyond the level that US citizens want to hold. The Federal Reserve could accomplish the same thing by buying all federal debt directly from the government, but that is currently illegal. Even if it wasn’t illegal, we would still end up with a trade deficit because the federal government would spend the money the Fed created out of thin air and US citizens would end up with more cash than they wanted to hold so they would export the money in exchange for Chinese goods.

Imagine that the US government would accept Chinese yuan as loans. What would it do with the yuan? It doesn’t want to pay federal employees in yuan because they can’t buy anything with them in the US. Their only option is to trade them to someone who wants to buy Chinese goods and import them to the US, such as Wal-Mart. The result is the same.

As President Trump tweeted, we should have fixed this years ago.