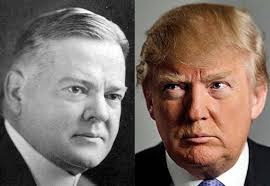 President Trump has saved dozens of US jobs from moving to other countries, mostly Mexico, by employing the shock and awe of a personal phone call to CEOs. Had he made the same visits before he became president he likely would have failed. And let’s not discuss the numbers of jobs his policies will cost the US that go unreported.

Another Republican president used a similar style to “encourage” business to comply – Herbert Hoover. Before he scaled the political mountain to the presidency, Hoover had become famous as an organizer of humanitarian efforts. He led 500 volunteers in distributing food, clothing, steamship tickets and cash to Americans in Europe to help them get home after war broke out in Europe in 1914. Later he worked to feed starving Belgians. The Belgian city of Leuven named a prominent square after him – Hooverplein.
The US entered the war in 1917 and President Wilson appointed Hoover to ensure the nation’s food needs as head of the US Food Administration. To avoid rationing, Hoover established days for people to avoid foods and save them for the soldiers: meatless Mondays, wheatless Wednesdays, and when in doubt, eat potatoes. He also created price controls and licensing requirements for suppliers.

Trained as an engineer and having become wealthy in the profession, Hoover was confident he could solve any social problem and engineer society as easily as building a dam. As president of the American Engineering Society, Hoover studied ways to reduce waste and increase efficiency in US businesses. He implemented many of his findings after President Harding appointed him to become Commerce Secretary. No detail was too small for his attention. At one point, he brought all of the brick makers in the country together and persuaded them to reduce the variety of sizes of bricks for building construction from hundreds to a dozen.

To his credit, Hoover rarely sought to pass laws to force businesses to comply with his policies. He relied on the prestige of his office, his persuasive powers and the brilliance of his ideas to subdue CEOs. But in 1927 he forced the Dill-White Bill through Congress that gave the government the power to shut down radio stations that it deemed non-useful to the public.

Hoover is best known for the part he played in the Great Depression. When GDP cratered, Hoover insisted that the key to quick recovery was to keep wages high. But Hoover didn’t get a law passed to implement that policy; he met with CEOs and intimidated them into agreeing not to cut wages. Of course, unions were strong at the time so Hoover didn’t have to convince them not to reduce wages. Then Congress passed the Smoot-Hawley tariff on imports to protect US farm products and Hoover refused to veto it, viewing import restrictions as a path to prosperity.

Students in Intro to Economics classes learn that keeping wages high when prices are falling is nothing but a recipe for massive unemployment. Most businessmen understood that before 1929. They typically cut wages when faced with a recession and falling prices in order to keep workers employed, knowing that a recovery would soon follow when they could restore wages. Hoover had to persuade them to abandon wisdom earned over centuries of experience and the result was the worst unemployment in the history of the US.

The US was a major exporter of agricultural products so the Smoot-Hawley tariff didn’t help US farmers because they faced little competition in the international marketplace. However, the tariff prevented US manufacturers from buying European equipment and thereby giving Europeans the dollars they needed to buy US-made food and that caused a crisis in farming. Even when this result became clear to everyone, Hoover refused to abandon the tariff because it was popular.

Now it appears that President Hoover has become President Trump’s mentor. He is using the respect for the office to intimidate US CEOs into abandoning plans to relocate production to Mexico, even though they had spent years and a lot of money assessing the situations and determining that was the best move for the company.

President Trump is like President Hoover in another way: Hoover was a progressive, or in plain English, a socialist. He chose to run for office as a Republican only because he thought his chances were better than in the Democrat party. Most conservatives understood that Trump is not a conservative, and he is probably not a socialist, but they didn’t know quite what he was.

Now the media and socialists (Democrats and establishment Republicans) have dusted off the old “fascist” weapon and aimed it at President Trump and conservatives because of Trump’s policies on immigration, jobs and trade. If readers don’t know what a fascist is, the Foundation for Economic Education has a couple of good articles here and here.

The important thing to know is that socialists introduced immigration and trade restrictions in Germany in the late 19th century after decades of freedom because their socialist policies had destroyed the German economy. Instead of abandoning socialism, socialists blamed foreigners for their problems. President Trump is doing the same thing.

In all of its history there has never been a foreign country that could beat the US in trade as long as the US maintained a free economy, regardless of the economic system of the foreign government. The only power capable of destroying the US economy resides in Washington, D.C.

Posted by Roger McKinney at 7:08 PM