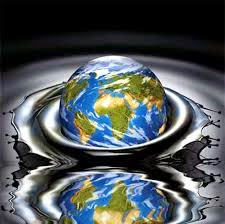 We took my six-month old grandson to the park this weekend and put him into a baby swing for the first time. He couldn't decide if it was fun or not and took turns crying for a while then laughing for a while. I think of that when I read about the oil bubble.


The Fed has reincarnated the real estate bubble of the early 2000s in the current tsunami of oil. To see how, we need summon the help of the Austrian Business-Cycle Theory (ABCT). The ABCT says that Fed induced interest rates below  the rate that the market would naturally set causes excess borrowing and investment in capital goods industries, not a general over investment, but bad investments in particular industries. The market reveals those excess investments through falling prices that cut into profits, reduce employment and spark a recession in the economy.

Over investment happened in the housing industry before 2007. The best book I have read on the subject is Gary Gorton’s Slapped by the Invisible Hand. The federal government had put a gun to the heads of bankers and forced them to make massive amounts of subprime mortgage loans. Subprime loans are made to borrowers who, by definition, cannot pay back the loans. But banks didn’t mind making such loans because they sold the loans to investment banks, or Fannie Mae, who repackaged them as bonds which they sold to other banks, mutual funds and large investors.

For decades, the Fed and mainstream economists preached the safety of the mortgage repackaging process because it spread the risk. The massive explosion of derivatives on all kinds of debt helped fulfill an ancient dream of mainstream economists for a market in which investors could hedge all risks through derivatives and, in their minds, put an end to risk. (See Financial Bull Riding for details of this nonsense.) When housing prices collapsed, the value of the bonds based on them also collapsed, leaving banks who held them broke and the financial crisis erupted.

The Fed never tires of generating disasters. Before the 1991 recession the Fed caused excessive investment in fiber optic cable. In the late 1990’s the Fed did it again with the dot com bubble. It has done it again in the oil industry. After the latest crisis had begun, no one wanted to borrow and investment except the oil industry as prices for oil were historically high. Risk seemed small since everyone “knew” we had reached peak oil production and prices could only rise. So just as they had done in real estate, banks loaned money at artificially low interest rates (thank you, Fed) for oil exploration, especially in the shale fields of Texas, Oklahoma and North Dakota.

Investment banks have loaned over $1 trillion to fuel the oil and gas boom in the past decade. They packaged those loans as bonds and resold them to other banks, mutual funds and large investors. As the price of oil continues to plummet, the value of those bonds will also fall and trigger another financial crisis. However, the total loans to the energy sector are only about one fifth that of the subprime mortgage market before the latest crisis, by some estimates.

The crisis hasn’t been noticeable yet because SEC rules allow companies to calculate the price of oil by averaging the price over the past 12 months. The largest dive in prices didn’t hit until November of last year, but as low prices persist the 12 month moving average will continue to fall and will reveal major losses.

Lately, major investment banks like Bank of America, Citigroup and JP Morgan Chase have suffered large losses on loans to the oil industry that the banks tried to resell to investors. In June of last year, the group tried to sell $1.3 billion in loans but could only find buyers recently at 85 cents on the dollar. In October, UBS and Goldman Sachs could get only 65 cents on the dollar for a $220 million dollar loan. And a February loan of $480 million by Goldman and UBS went for 80 cents.
These losses are happening when oil has stabilized in the mid $40’s per barrel, but will it stay there? Prices could go lower because producers are looking at the variable cost as the shutdown price and not the total cost of production that media outlets fixate on. Also, excess oil is being stored for future sale, but the world is running out of storage fast. Most empty tankers have been filled and the main storage facility at Cushing, Oklahoma is nearing capacity. The storage industry may reach critical capacity in May, after which all excess production will hit the spot market and cause prices to fall drastically.

The above all assumes that the US economy will keep growing this year, but it is more likely to go into recession as energy companies shed workers and jettison on capital spending plans to keep themselves from sinking. The bulk of all new jobs created since 2008 have been in the energy sector. Suppliers to the energy industry, banks, accounting firms, and even the steel industry, will be hurt as the industry reigns in spending. As this bubble pops we may be looking at the beginning of the next recession, which will cause demand for oil products to fall.

Like my grandson, I would laugh if it weren't so scary.

Posted by Roger McKinney at 8:40 PM