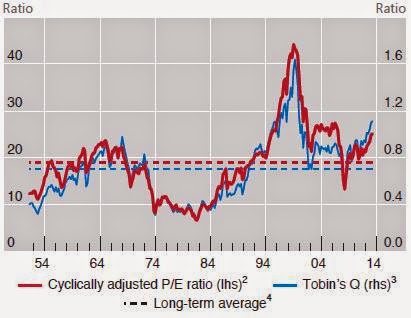 ABCT investing offers financial advise derived from the Austrian business-cycle theory, so to be confident in that advise investors need to be confident in the theory. The most visible institution promoting the theory today is the Bank for International Settlements (BIS). The BIS is the central bank for central banks based in Basel, Switzerland. Just as the Fed in the US coordinates the exchange of funds for commercial banks, the BIS acts as a clearinghouse that coordinates the international transfer of funds between the central banks of nations.

Claudio Borio and William White of the BIS have used the ABCT for years to analyze events and create policy. Recently, the bank created a minor storm in the world of economics and central bank policy with the release of its 84th annual report. The report asserts that the loose monetary policies of the world's central banks as well as fiscal policies of governments have failed and continuation of those policies will prove harmful. Mainstream economists trashed the report. Martin Wolf of the Financial Times descended to juvenile language. Gavyn Davies, also of the FT,  wrote of the report,

The Bank for International Settlements (BIS) caused a splash last weekend with an annual report that spelled out in detail why it disagrees with central elements of the strategy currently being adopted by its members, the major national central banks. On Wednesday, Fed Chair Janet Yellen mounted a strident defence of that strategy in her speech on “Monetary Policy and Financial Stability”. She could have been speaking for any of the major four central banks, all of which are adopting basically the same approach.

Davies analyzed the debate as Keynes vs. Wicksell and there is a lot of truth in it. But it really boils down to micro vs. macro. The BIS report focuses on the microeconomic elements of the latest recession and weak recovery while the mainstream attackers pretend that micro doesn't exist. Mainstream macro critics ignore almost all of the points made by the BIS and their criticisms amount to little more than lame insults and claims that the BIS is wrong because it doesn't agree with them. The BIS economists look at the long run while mainstream economists can see little farther than six months ahead.

Austrian economics also emphasizes the microeconomics and sees mainstream macro as something closer to witchcraft than science. Mainstream macro critics of the BIS are clearly a little sensitive because of the many assaults on them since the recession because they failed to see the crisis coming and their policies have completely failed to boost the recovery.
The BIS report focuses on what it calls the financial cycle, which it defines as “a combination of credit aggregates and property prices and lasts much longer, roughly 15 to 20 years.” Financial cycles can encompass several business cycles, but recessions that coincide with a peak in the financial cycle, as the latest one did, are far more severe. Austrian economists don’t identify a financial cycle, but Hayek and Mises often noted that the depths of the recession are inversely proportional to the height of the preceding credit expansion. The BIS’s financial cycle is just a refinement of the Austrian theory.
The BIS doesn't wear its Austrian affiliation on its sleeve, but it's noticeable. Here are some examples.

The prologue to the Great Recession is well known. A major financial boom developed against the backdrop of low and stable inflation, turbocharged, as so often in past such episodes, by financial innovation. Credit and property prices soared, shrugging off a shallow recession in the early 2000s and boosting economic growth once more (Chapter IV). Spirits ran high. There was talk of a Great Moderation – a general sense that policymakers had finally tamed the business cycle and uncovered the deepest secrets of the economy. The recession that followed shattered this illusion. As the financial boom turned to bust, a financial crisis of rare proportions erupted. Output and world trade collapsed. The ghost of the Great Depression loomed large. The policy response was haunted by that ghost. [Page 10]

Fiscal policy expansion failed to jump-start the economy. In fact, gaping holes opened up in the fiscal accounts. [Page 11]

With hindsight at least, this sequence of events should not be surprising. The recession was not the typical postwar recession to quell inflation. This was a balance sheet recession, associated with the bust of an outsize financial cycle. As a result, the debt and capital stock overhangs were much larger, the damage to the  financial sector far greater and the room for policy manoeuvre much more limited. [Page 11]

Booms make it all too easy to overestimate potential output and growth as well as to misallocate capital and labour. [Page 11. A lot of the mainstream criticism of the paper is a result of just this type of overestimation.]

As long as asset quality is poor and capital meagre, banks will tend to restrict overall credit supply and, more importantly, misallocate it. As they lick their wounds, they will naturally retrench. But they will keep on lending to derelict borrowers (to avoid recognising losses) while cutting back on credit or making it dearer for those in better shape. [Page 11]

But there are also important, probably dominant, effects that operate through misallocations of credit and other resources as well as inflexible markets for goods, labour and capital. These are hardly mentioned in the literature but deserve more attention. As a corollary, in the wake of a balance sheet recession, the allocation of credit matters more than its aggregate amount. Given the debt overhangs, it is not surprising that, as empirical evidence indicates, postcrisis recoveries tend to be “credit-less”. And even if overall credit fails to grow strongly on a net basis, it is important that good borrowers obtain it rather than bad ones. [Page 15. Notice the emphasis on misallocation of credit, which Austrian economists refer to as malivestment.]

The developments in the year under review thus indicate that monetary policy had a powerful impact on the entire investment spectrum through its effect on perceived value and risk. Accommodative monetary conditions and low benchmark yields – reinforced by subdued volatility – motivated investors to take on more risk and leverage in their search for yield. [Page 38. This is why investors should pay attention]

During financial booms, intertemporal and sectoral imbalances build up. Households, firms and often governments accumulate debt based on optimistic expectations about their future income, asset prices and the ease with which they are able to access credit. Banks overestimate the solidity of their assets, the solvency of their borrowers and their own ability to refinance themselves by rolling over short-term debt. Meanwhile, the composition of output – and hence the allocation of capital and labour across different sectors – may not match the composition of sustainable demand. One clear example is the expansion of the construction sector in several countries, with its legacy of large inventories of unsold properties. The public sector too may grow too large, and its debt may become unsustainable. [Page 45. Notice the emphasis on the disruption of coordination across time and between sectors, both of which are absent from mainstream macro but prominent in the ABCT.]

Meanwhile, a significant fraction of capital and labour becomes idle and needs to find new uses. This generally entails the financing of new capital and creation of new firms as well as the need for unemployed workers to retrain, relocate and search for new jobs. All of this requires time and effort. [Page 45. Notice the focus on micro factors, which mainstream macro ignores.]

The duration and intensity of the slump following a balance sheet recession depend on several factors. The first is the extent of the initial imbalances. The larger the excess during the boom, the larger is the needed correction afterwards. Financial busts tend to be associated with deeper recessions, and the speed of the recovery tends to be inversely related to the size of the preceding boom in credit and real estate. [Page 45]

Monetary policy globally remained very accommodative over the past year as policy rates stayed low and central bank balance sheets expanded further. Central banks in the major advanced economies continued to face an unusually sluggish recovery despite prolonged extraordinary monetary easing. This suggests that monetary policy has been relatively ineffective in boosting a recovery from a balance sheet recession. [Page 85]

But some of the legacy of balance sheet recessions has to do with non-financial factors. The misallocations of capital and labour that go hand in hand with unsustainable financial booms can sap the traction of demand management policies, as these address only symptoms rather than underlying problems. For instance, the residential construction sector would normally be more sensitive than many others to lower interest rates, but it expanded too much during the boom. In fact, the historical record indicates that the positive relationship between the degree of monetary accommodation during recessions and the strength of the subsequent recovery vanishes when the recession is associated with a financial crisis (Box V.B). Moreover, deleveraging during the recession, regardless of how it is measured, eventually ushers in a stronger recovery. [Page 92]

...But the relative ineffectiveness of monetary policy does signify that it cannot substitute for measures that tackle the underlying problems, promoting the necessary balance sheet repair and structural reforms. [Page 92]

Unless it is recognised, limited effectiveness implies a fruitless effort to apply the same measures more persistently or forcefully. The consequence is not only inadequate progress but also amplification of unintended side effects, and the aftermath of the crisis has highlighted several such side effects. In particular, prolonged and aggressive easing reduces incentives to repair balance sheets and to implement necessary structural reforms, thereby hindering the needed reallocation of resources. It may also foster too much risk-taking in financial markets (Chapter II). And it may generate unwelcome spillovers in other economies at different points in their financial and business cycles (see below). Put differently, under limited policy effectiveness, the balance between benefits and costs of prolonged monetary accommodation has deteriorated over time. [Page 92. Notice the mention of the micro concept of diminishing marginal returns to monetary policy, something all macro economists completely ignore.]

In fact, the historical record indicates that deflationary spirals have been exceptional and that deflationary periods, especially mild ones, have been consistent with sustained economic growth (Box V.D). Some countries in recent decades have indeed experienced growth with disinflation, no doubt because of the influence of positive supply side factors. [Page 97. This is great! The BIS actually endorses mild deflation, the boogey man that makes most central bankers wet their pants!]

Another important theme running through the report that the writers don’t make explicit is the uncertainty due to ignorance of the future that businessmen and bankers face. In other words, the BIS deals with the real world of real people. Mainstream macro on the other hand assumes perfect knowledge for all bankers and business people; such knowledge is necessary for the economy to achieve equilibrium, which is the kernel of all mainstream macro algorithms. The full report is great and I encourage investors to read the whole thing.

Posted by Roger McKinney at 6:12 PM